Our Mission and Values

Our mission is three fold:

2. Provide individuals training opportunities and a place to grow.

3.  Provide a high level of service to our customers while being the environmental leader in the industry and helpful in the communities we serve.​

GIVE YOUR BEST EVERYDAY

We accomplish extraordinary results by giving our best every day and helping others do the same. As we work on the collective goal of making our company better, extraordinary outcomes will occur with the special blend of humility, courage, and genuine desire to be good.

Two of the finest characteristics anyone can possess arehonestlyand mutual respect. At Swift, we trust each other, have positive assumptions, and allow everyone to have a voice regardless of level, title, or tenure.

PASSIONATE ABOUT CONTINUAL LEARNING AND IMPROVEMENT

Improvement is a result of taking risks, innovating, and sometimes even failing. Creating efficiencies, investing in innovation, and constant learning happens when we put aside the fear of failure and focus on problem-solving. Continual learning leads to continual improvement.

1972 Common Market and Swift Transportation merged, keeping the Swift name. Jerry’s brother, Ronald and family friend Randy Knight join the family business and decide to work as partners. At that time Swift primarily hauled Arizona-grown cotton from the West Coast for shipment overseas using flatbeds and vans. 1978 Swift’s fleet grows to 25 trucks-flatbed, van and refrigerated- traveling from Phoenix to Los Angeles and up to San Francisco Bay and back. About half of the trucks are driven by Owner Operators, and the fleet includes stretch trailers, drop decks, 40-foot flatbeds, and 15 45-foot vans.

1983 Swift expands to 10 terminals and offers: Intermodal, Refrigerated, Dry Van, and Flatbed trucks. 1984 Swift’s revenue rises to $25 million. 1987 Swift establishes its driver training school in Phoenix, known as Swift Academy. The school is certified by the Arizona Department of Transportation.

1990 Continuing its successful acquisition strategy, Swift purchases flatbed company Kaibab and a 26% fleet increase to over 1300 trucks, and $156 million. Swift files an Initial Public Offering and goes public for the first time in the company’s history. 1991 Swift acquires Arthur H. Fulton, a beverage carrier with several large beer company contracts, expanding its services into the Southeast. The acquisition costs $8.4 million. Revenues grows 21.8 percent, despite a deepening recession in the US. The Interstate Truckload Carrier Conference names Swift one of the top three carriers in the US, with the best safety record of companies operating in excess of 100 million miles. 1993 Two-thirds of Swift’s business is in the West, and the company aims to increase its presence in the East with further acquisitions. Swift acquires West’s Best Freight Systems of Lewiston, Idaho. 1994 Swift acquires East-West Transportation and Missouri-Nebraska Express (MNX) for $40 million, further expanding the company’s nationwide reach. Within the first 90 days after Swift begins managing MNX, that company reverses its previous monthly losses of $1 million a month and generates $1 million of net income. 1996 September 12, Swift buys the dry freight operations of Navajo Shippers for more than $7 million, bringing with it trucking equipment and 30 Owner Operators. 1999 Swift exceeds $1 billion in revenues for the first time in company history as revenues rise 21.5 percent. Swift becomes one of the founders of Transplace.com, “the Supermarket for Transportation Solutions.” Transplace is supported by as fleet of more than 40,000 trucks from the partner carriers, making it a leading force in the logistics field.

2010 Swift made capital markets history with the largest trucking IPO ever and the second-largest US IPO of 2010 after General Motors. 2011 Swift launches a container-on-flat-car freight service that covers all major centers in North America as well as Northeastern Mexico, Central Mexico, Guadalajara, and Mexico City. The service uses Kansas City Southern Railroad and its partner, Kansas City Southern de Mexico Railroad for the service. 2017 September 10, 2017 Knight-Swift Transportation Holdings Inc. announced the completion of the merger of Knight Transportation, Inc. and Swift Transportation Company. The Company will maintain the distinct Knight and Swift brands and operations while implementing best practices across the enterprise. Kevin Knight was named CEO of Swift Transportation.

Adam Miller joined Knight Transportation in September 2002. He was appointed as CFO in May 2012 and served as the Secretary and Treasurer since February 2011. Prior to becoming CFO of Knight Transportation, Mr. Miller served as the Senior Vice President of Accounting and Finance from February 2011 to May 2012 and as Controller of Knight Refrigerated, LLC from January 2006 to February 2011. Prior to his appointment as Controller of Knight Refrigerated, LLC, Mr. Miller served in several other accounting and finance positions at Knight since 2002. Following the merger with Swift Transportation in September 2017, Mr. Miller was appointed as the CFO of Knight-Swift Transportation Holdings Inc. November 13, 2020, Adam Miller was appointed President of Swift Transportation and will continue to serve as the Chief Financial Officer of Swift’s parent company, Knight-Swift. Adam earned his Bachelor of Science degree in accounting from Arizona State University and is a Certified Public Accountant in the state of Arizona.

Father to three active kids who keep him and his amazing wife on the move. When he has a break from work, nothing beats a date night with his wife or a movie night with his kids. Enjoys exercising and watching football, but not at the same time.

Outside of work, Kevin and his wife's greatest memories have been with their family, including spending time in the mountains or sand dunes. They also love spending time serving with their church group and community. Kevin also speaks Mandarin Chinese, although it is a little rusty since it has been a few decades since he lived in Taiwan and used it daily!

Away from work, Mike enjoys spending time with his wife and family, playing a little golf and, of course, following his beloved Broncos, Jayhawks, and Royals.

Rachel Monti joined Swift Transportation in May 1998, beginning her tenure in pricing, after which she helped lead quality assurance ISO certification efforts.  Starting in 2000, Ms. Monti began serving in human resource positions of increasing responsibility.  Ms. Monti has held the top leadership position in Human Resources for more than ten years, currently serving as Senior Vice President and Chief Human Resource Officer.  Ms. Monti earned her Bachelor of Arts degree in psychology from the University of South Alabama and her Master of Counseling degree from the University of Phoenix.  She holds multiple professional certifications in the human resources specialty.

Having always been an avid traveler, Rachel finds it hard to stay in one place.  Close to home, she often explores Arizona's hiking trails or witnesses the amazing beauty of its scenery by motorcycle.  When she has free time, her passion is traveling within the U.S. and internationally.  Rachel loves to experience other places and traditions because it expands her appreciation of diverse cultures as well as her own. Her record for the longest single flight (so far) is a little over 16 hours traveling to Australia.

Jim enjoys spending time with his beautiful wife and their three teenagers at the lake, off-roading or just relaxing at the house. Jim also likes working out, weekend trips to Puerto Penasco, Mexico & anything with a lot of horsepower!

When he’s not working, he enjoys spending time with his wife and any combination of their three adult children. He enjoys playing and listening to music and is an avid hockey fan.

Mark Deere is the Senior Vice President of Swift Dedicated Fleet Services, one of the nation's largest dedicated fleet providers. During his 16-year Swift career, he has also held executive leadership roles in both Dedicated and Linehaul Operations, including stints as V.P. Customer Service, V.P. Network Capacity Management, V.P. Western Operations, and V.P. Dedicated Sales. He joined Swift via the M.S. Carriers acquisition in 2001. Mark is a 30+ year veteran of the transportation industry with prior leadership roles as Senior V.P. Operations at Transport Industries and President of Lake Shore-Pacific Corporation, along with multiple managerial positions at CRST International and Hormel Foods. Mark holds both a BBA in Finance and an MBA from the University of Iowa.

Mark recently became an "empty-nester" and is looking forward to more free time… Mark and his family are avid sports fans and have been to over 100 different sporting venues around the country.  Relaxation includes creating rustic wood projects for friends and family in his development as a "hack" artist.

Joe Sherer joined Knight in 2001. Joe currently serves as the Sr. Vice President of Logistics since January 2021 and most recently was the SVP of Account Management and Customer Service. He started in Driver Payroll and later became the Director of Credit & Billing. In July 2004, Joe moved to Southern CA as a Regional Sales Manager while also holding positions as Director of Sales and Vice President of Sales before moving back to Arizona as a General Manager in 2013. Joe earned his bachelor’s degree in Business Management from Arizona State University.

Married to an amazing wife and proud father of 3. When he is not cheering on his kids at their sporting events you will usually find him cheering on the Wolverines. Enjoys the simple life with a touch of “sarcasm.” GO BLUE! 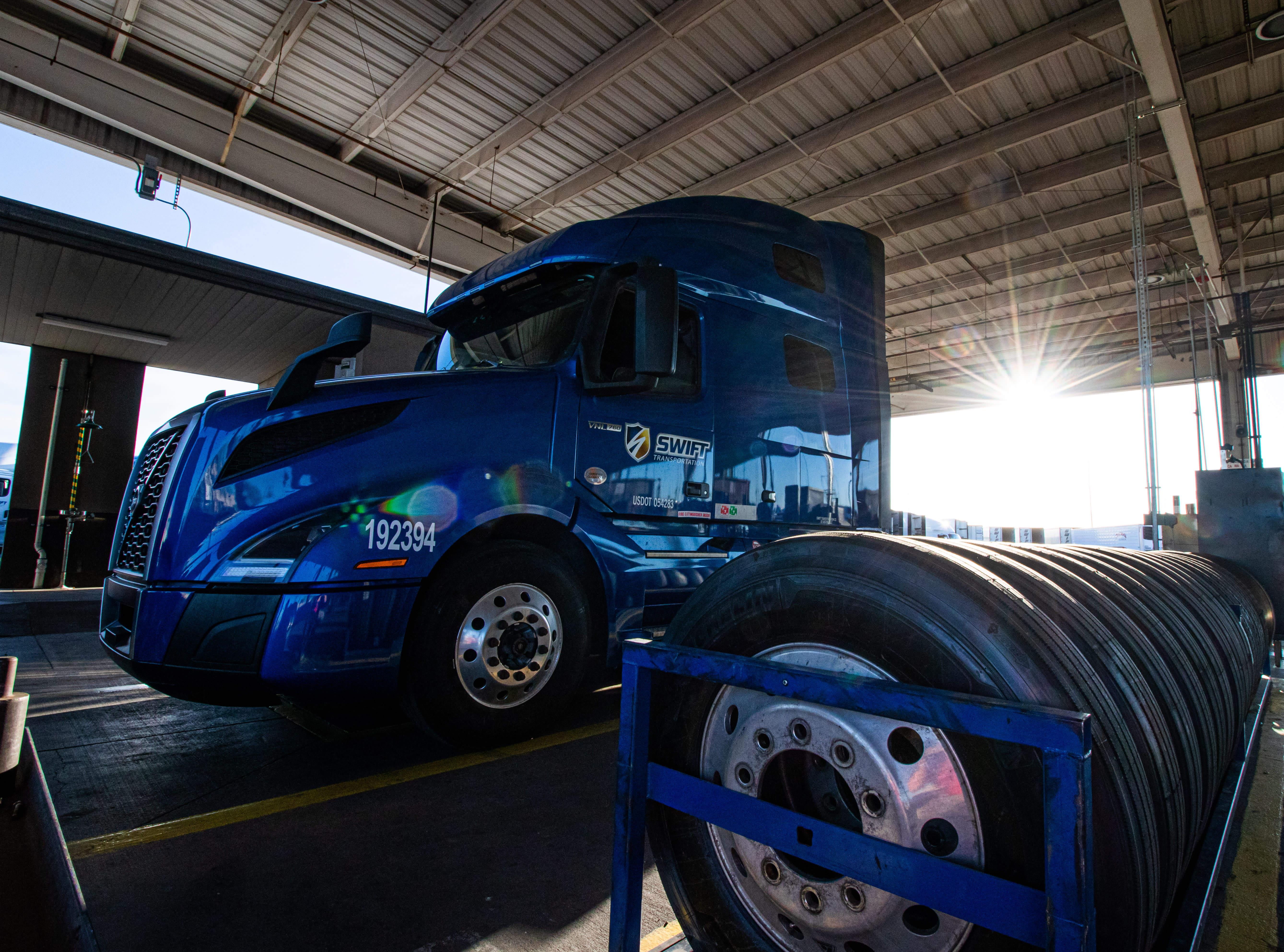 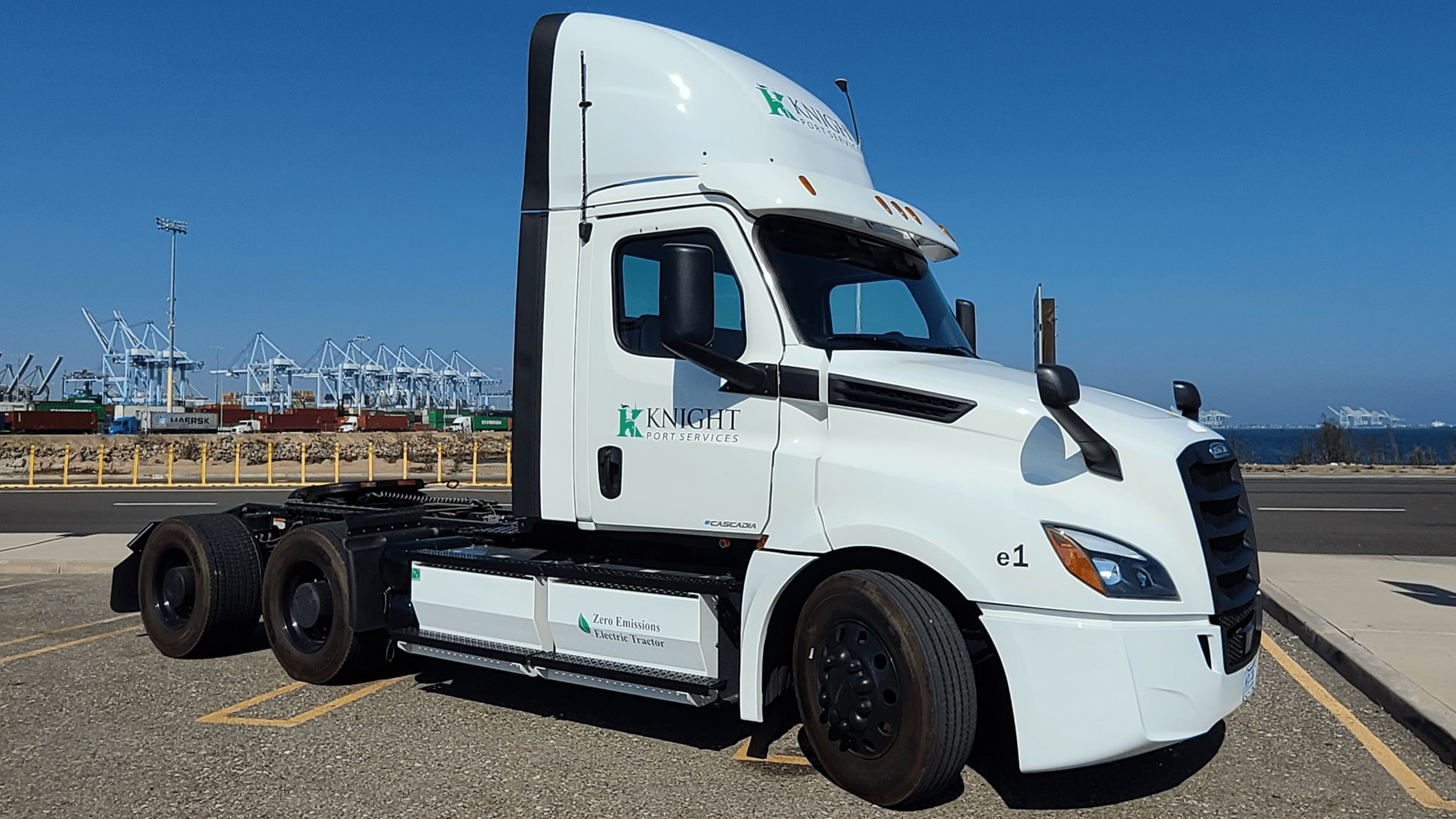